As an Internet browsing magpie I really found myself benefiting from tabbed browsing and would consider a browser without such a function as unwieldy as a mouse without a mouse wheel. My first exposure to this was Netcaptor, a few years later I was recommended some browser in early beta stages called Firefox.

I’ve not looked back since and now find that Firefox’s plugins to be equally impossible to live without. The benefit of moulding browser features to suit me has become very important. Internet Explorer had plugins and extensions for some time but a lot of these manifested themselves as clumsy toolbars or, worse, malware and viruses. I’m keen to explore Google’s Chrome browser but know that until I can browse using familiar tools I simply won’t want to spend much time with it.

So, Firefox and its assortment of plugins it is then, a few of which I’ll mention here.

Two extensions to Firefox are, for me, absolutely must haves. The first is the accompaniment to the AI Roboform application. Roboform is a password manager. It integrates very neatly with some browsers and quickly found itself to be a godsend for someone like me who fills in numerous web-forms or has a multitude of logins. It’s very easy to use and pretty much completely replaced my Bookmarks function as, with a single click, it’s possible to go to a site, log in and start browsing. It supports multiple users and allows for hot-swapping of users so you don’t even need to leave the current web-page to re-fill a form using completely different details. The current lack of support for Google Chrome is a shame and I’d be interested to find an alternative for use in Chrome if it was as well realised and easy to use as Roboform is. Firefox addon can be found here.

Adblock Plus was one of the first plugins I installed and has improved my browsing experience immeasurably. As you might expect, the plugin prevents adverts from being loading into the pages that you browse. Although its built-in blacklist is comprehensive it’s possible to add any content or server to it that you wish. Sometimes when sites are running a timed promotion the entire site may get re-branded for the period of the promotion, if you don’t like it you can simply block those specific images whilst keeping access to the site open. Adblock will also block Flash-based adverts too. I’ve got so accustomed to an Internet with hardly any adverts I tend to get a bit of a shock when I use another browser without ad-blocking in it. It’s like night and day.

Ad blocking is available to all without the need of a plugin. If you’re feeling a little adventurous why not try modifying your hosts file or even replacing it with a pre-made one like this one.

To finish off this topic (for now) I’ll mention Foxmarks. A little over a year ago I got a second computer and set up a wireless network. I wanted some settings to be unified over the two machines whilst keeping others unique to each. Bookmarks fell in to the former area. I guess I could have manually copy and pasted things but I decided to see if an out-of-the-box solution existed. Foxmarks was it. Foxmarks is an online bookmarks manager. You go to their site, create an account and upload your bookmarks to them. This means that you can access your bookmarks in any browser you wish so long as you’re online. The Firefox addon provides you with a way of synchronising your system with the stored bookmarks. What’s nice is that you can keep bookmarking the way you normally do – by using your browser menus and buttons – but Foxmarks will monitor changes and upload / download them to keep your browser in synch. Installing this on the two machines means that my bookmarks are unified across machines. Simple, elegant. I really like this as it’s a totally transparent solution to a little usability issue I was facing and met my needs perfectly.

Foxmarks looks to be evolving into something more than a bookmark manager but I’ve yet to investigate it properly.

Do you have any cant-live-without browser extensions or neat solutions to specific scenarios?

Of the two types of person to be, I’m a cat person. They’re fascinating, beautiful creatures. Now, I’m not alone in being fond of cats and, where there’s a demographic, there’s someone prepared to market something silly to them.

Every now and again, something pops up that suggests a less mercenary take on the fascination and today the incessantly brilliant Lifehacker showcases an alternative to a cat climbing tree. I’ll show you the image from the article and let you decide if you want to follow it up: 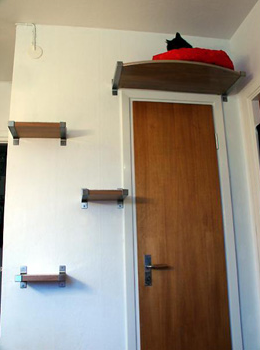 I think any cat-owner can appreciate just how much their cat enjoys a palatial view. I recall reading a book many years ago that made an aside on a piece of cat-behaviour and termed it Cat Chess. The definition being that each cat in the neighbourhood plays this game where the objective is to reach a vantage point where it can see all the other cats in the area whilst remaining hidden from view. It’s funny because it’s true.

If you’re in the mood for further proof of the superior wit of cat owners to dog owners then allow me to present to you the Infinite Cat Project.

On the off-chance that such a thing as reincarnation exists I’ve already determined that my preferred form would be a cat owned by a  rich, old, jewish widow. Life surely can’t get better than that.

Wouldn’t you know it, dad-at-13 tearaway’s girlfriend is more of a nasty piece of white trash than first appearances would suggest.

Frankly, I wouldn’t touch her with yours.

I don’t do Twitter. Nor do I do Facebook. Or MySpace. Or any of this social networking junk*. Social networking, to me, reads as “online popularity contest”. I don’t need to compare the number of, mostly virtual, friends I have with someone else. Nor do I need to deliver constant smalltalk to them.

Obviously, I blog. Sometimes. But I’ve been doing that a while and, I assure you, it’s more for my benefit than it is for yours.

Christopher Walken however, now there’s a guy who catches people’s eye. Wouldn’t you know it? He’s on Twitter too and, frankly some of his content is superb:

The Pope is in Africa “reaffirming the ban on condom use.” His old stuff was funnier. I don’t get this new material. Too edgy for my taste.

Dance for me Chris! Dance!

*Oh, I am on LinkedIn, but that’s for professional reasons rather than social ones.

NFG’s Arcade Font Lister is a cracking little trip down memory lane of times spent wandering around a small dingey arcade at one end of Ilford watching the attract modes of games like After Burner, Wonderboy, Contra and Gradius.

The site also allows has a neat tool allowing you to create your own phrases in any of those fonts and with a variety of effects.

I love software. There’s so many tasks PCs can perform and good software can make all the difference in the world. Of course, leading industry standard software is quite pricey and can be overkill for many. Fortunately, there is an amazing amount of well produced software out there in shareware and freeware land.

For those of you that follow my newsbites (look, they’re over there in the sidebar) you’ll see that I often highlight findings from the consistently excellent Lifehacker site. Through this site I’ve learned tricks and discovered software I’d never have thought to try. Their comments section is often filled with additional information from incisive readers. It’s about as far away from the cesspit mentality of gaming blogs as you can imagine which is ironic given that Lifehacker’s parent media company also runs a rather well known but exceedingly trashy games blog.

Anyway, currently I’m looking into text editors. The value of a good text editor can’t be understated. If you find yourself editing any sort of scripting file then you’ll appreciate just why text editors are still one of the more important applications on a computer. Notepad is enough for many and it is purposefully designed to be a light and simple text editor. My textual needs can’t be met by Notepad any longer. I’m frequently viewing lengthy game FAQs, ansi art, XML or other language files. Notepad will display them all, but there’s more to a text editor than just text. 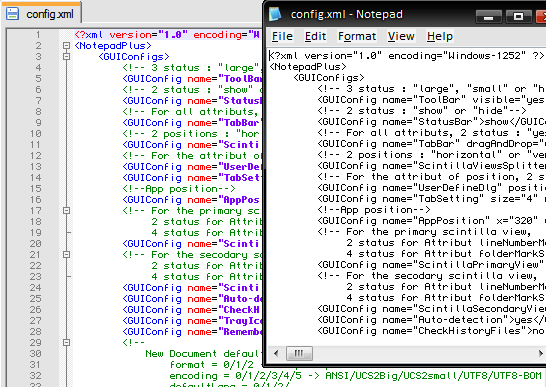 I had used UltraEdit for quite some time but I realised it was just far more than I needed and the level of detail in the menus was offputting. Up until very recently I’ve enjoyed using PSPad and can’t really complain. However, following a Lifehacker “Hive Five” article where readers were asked to nominate their favourite text editors a clear winner emerged in the form of Notepad++.

Notepad++ is both free and open-source. It features a plug-in system and is therefore extendable. In its default form it seems to host the right amount of features without being too overwhelming. If a feature isn’t available then there’s probably a plugin to cover it. One such feature I like is for a text editor to be able to edit a file on a remote server – something that can be done with all three of the text editors mentioned above. Notepad++ doesn’t have this feature built in as standard but available through a plugin. The choice is yours. It’s worth noting that that particular plugin is included in the install file for Notepad++.

So far, everything I’ve checked out in it is great with the exception of one single thing. And it’s a small, niggly thing, but it gets to me. 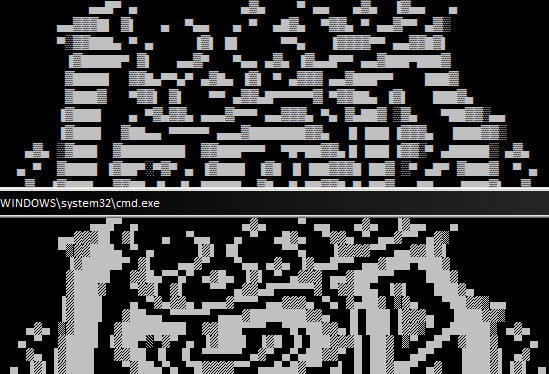 Whilst the image above may seem like nonsense it’s not. It’s part of a text file that features ANSI characters. These characters are used as crude graphic blocks to build a block image with. I’ve been arguing with Notepad++ over this and it simply doesn’t want to play nice.

Part of the problem stems from the fact that Notepad++ detects the type of file being fed into it and displays its content accordingly. For example, when it detects an XML file it colours it as you see in the first image. This aids comprehension. It is easier to spot different parts of the language as key parts of it are highlighted in different colours. This is a great feature of modern text editors.

Notepad++ allows for teaking of its presentational styles. You can change colours and fonts at will for each different language it supports. You can add user-defined languages for anything it doesn’t already know.

When it comes to ANSI content, we hit a wall. Notepad++ correctly recognises the language and displays it according to its predetermined style. However, this is the one style that it doesn’t allow editing of. Not through its interface anyway. The styles, it seems, are defined in an XML file but, as yet, I’ve been unable to get it to acknowledge my preferred changes for that particular language.

A user-defined style should work! But no. Because it doesn’t override the file format that is already recognised by default like the ANSI content is. Bugger.

To be honest, it’s not the end of the world and those sort of files are unlikely to ever be edited by me as opposed to merely viewing. It’s just an annoyance that I’ll either want to use a separate program just for that filetype or put up with it being rendered incorrectly in Notepad++.

If you use Notepad++ and have overcome this issue, please let me know how you did it!