The headlines both on and offline seem to be increasingly littered with the doings of hackers. These digital rapscallions dashing to and fro, performing acts of daring like some cyberpunk Zorro. It’s all so gosh darn romantic.

Certain readers may have spotted that koffdrop.com itself was hacked recently. Apparently the site was targetted and labelled as an enemy of Pakistan. Now, there’s a good reason why I’ve not declared my views on Pakistan very prominently on my site. That would be because I don’t have any. Since the incident, however, I’m of the opinion that Pakistan has some pretty shoddy and misguided hackers.

Elsewhere, various databases are hacked by more proficient (though equally misguided) hackers and wodges of private data and spilled onto torrent sites. Here and there various hacking groups claim responsibility for such acts. I think that’s a behaviour worth making a mental note of. Can you think of other types of activists who claim responsibility for their incendiary activities? I can.

In gaming circles there is much emotive talk about Geohot and PlayStation 3. The media, fawning buffoons that they are, simply can’t resist the salicious David-versus-Goliath spin on all of this and adding more melodrama to a topic that too many folk are using personal feelings rather than concrete data to draw conclusions from.

Now, amongst the feedback of all of this there are a few principles being hammered out:

Let’s review these in a little more detail

I bought the PS3. It’s mine. I can do what I like with it

No, that’s incorrect. Like nearly every single argument where someone starts by saying “I bought X so…” the understanding of ownership is flawed. Arguments based on that flawed understanding are going to be increasingly flawed.

What you bought is a device that provides access to a manufacturer’s technology and services. You own the device, you do not own the technology or service. Furthermore, that access is given to you under specific terms and conditions that you agree to before the device allows you to use it and, further to that, usage of the device typically declares your consent to the terms.

It’s crucial to appreciate the distinction between the device and the technology inside it and the service(s) it provides.

Similar principles are true of software. When you buy a game you have not purchased the software. You have purchased a copy of someone else’s software and a licence to use that copy under specific terms. The software is still owned by the software publisher. The shiny disc is yours, the data on it is not.

Back to hardware. As far as the device is concerned, you can do what you like. Smash it with a hammer and put a video of it on YouTube. Paint it bright pink. The hardware people don’t care. Start fucking about with the technology though, well, that’s a different story. Modifying the technology to work in a way that is not sanctioned by the terms under which you agreed to use it – you’d be the one in the wrong buster, not the guys who own the technology and who sold you the device.

On top of this, consumers get bent out of shape really quickly the moment a company doesn’t maintain their side of an agreement. When consumers decide to break that agreement? Well shee-it, that’s their God-given right dammit! And just because they don’t keep their word doesn’t mean they should lose any perks or benefits. Convenient double-standards at play in that mentality, don’t you think?

There’s a number of fallacies at play in this statement. Let’s start with the most glaring by asking what prompted the removal of that functionality in the first place?

Oh, hang about, that would be because it was abused by hackers. It’s funny how they keep that side of things rather quiet when justifying their crusade isn’t it? You hacked it and so it got removed. Now you’re acting like the removal was unfair so you’re hacking things even more. The concepts of cause and effect appear to be lost on these people. Which is a bit odd because hackers are, broadly speaking, pretty smart guys.

OtherOS, as its name suggests, allowed the installation of other operating systems onto the PS3. Notably linux. Now, if you’re looking for a platform to run linux on and you feel that your only choice is a $600 videogames console as opposed to, say, a $500 computer then you’re not going to get very far handling an operating system like linux. For a start, you won’t have a keyboard, let alone the appreciation of using the right tool for the right job. So let’s dispense with the notion that OtherOS provided a crucial service that simply could not be replicated to an equal standard in any other form.

Let’s also dispense with the idea that anybody gave a shit about OtherOS until it was revealed as means to exploit the PS3’s security and tempt greedy gamers with the prospect of pirating games instead of paying for them.

So, in response to the actions of hackers, Sony removed OtherOS with a firmware update. Internet crybabies screamed that their most beloved of PS3 features (that one that they never used but had recently become very interested in) was going to be taken away from them. Of course they did – because people bitch about having something taken away from them, even if they never intended to use it. “But it’s the principle!” they cry. Well, gee, if there’s one thing we know about gamers it’s that they’re people of principle. So long as that principle serves them, that is. Otherwise the rest of the world can fuck off for all they care. But, you know, principles. Principles!

That’s so true. Hackers are digital freedom-fighters. Enabling free speech from the evil corrupt closed-nature of the cyber-confines that these monolithic and brooding corporations impose upon helpless citizens.

This is a hacker: 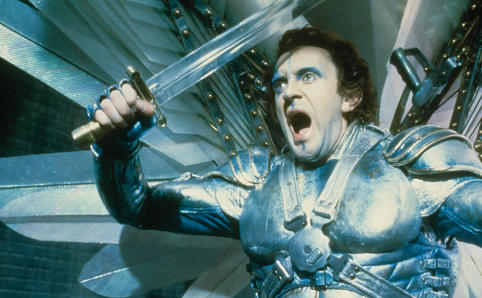 Now, if I were a pacifist I might be against guns. So to prove my point, I’d hack guns so that ammunition of any sort can be made freely available to any gun-owner and I’d broadcast my methods to the world. No, I’m not endorsing unlicensed use of firearms, sir! I’m a pacifist! See, I wrote it on my blog so it must be true. What do you mean by saying my actions contradict my words. I wrote it down on the internet. The internet doesn’t lie!

Sarcasm aside, saying you don’t endorse piracy whilst indirectly yet knowingly enabling a tidal wave of piracy is what is commonly referred to as bullshit.

Once again, let’s remember that hackers are smart geezers. They understand things that would leave most of us baffled. So shrugging their shoulders and acting like they don’t know what they’re not aware of the impact of their actions is spectacularly unconvincing.

Hacking does not equal piracy

Yes, lets overlook a huge wave of historical evidence that sets the template for cause and effect and say that hacking doesn’t equal piracy. Of course it doesn’t. Why doesn’t it? Because hackers don’t endorse piracy, didn’t you hear?!

So, OtherOS was around for a few years. The PS3 was unhacked. Folk had the oppurtunity to use a powerful, open console to develop homebrew applications for the benefit of others. Did they? Not really, no.

PS3 gets hacked. Hacking doesn’t equal piracy though, does it? How long did it take for people to start using the hacks to enable pirate copies of software to run on the system? Days.

But that most be coincidence because, you know, hacking brings oppurtunity for betterment, not piracy. There’s no evidence to suggest that piracy follows a hacked system like the papparazzi follow Paris Hilton. Well, nothing aside from every hacked console there’s ever been in the last 25 years. But, you know, that’s not really relevant I guess. Real world facts have no place when you’re preaching a sermon, do they?

And the PS3 has been hacked. So what wondrous benefits to people has it brought other than piracy? Well, there’s been.. erm.. lots of cheating. Yes! See, cheaters can enjoy their games using less skill and ruin the experience for all the people that still play by the rules. Remember folks, gamers are all about principles! What else has hacking enabled other than mass cheating and piracy? Well… some emulators I guess. Whoop dee doo. What about PS2 backwards compatibility – lots of people are asking for that!.. er nah. I guess the hackers aren’t really into that.

Hey, what about reinstating OtherOS functionality? Tellingly.. no.

So when you strip away all the worthless pantomime drama and the greed and the general ignorance at play in all of this you have a fairly transparent behaviour being dressed up as something more than it is. It’s just a script kiddie having a tantrum and wanting attention.

The hackers we have been reading so much about recently are not doing anyone any favours. They are not crusading for the greater good they are merely digital terrorists. When their particular beliefs are not being met they do not communicate like civil people, they hide behind $TuP1D NAME$ and exploit those that aren’t doing things in the manner they want, happily letting innocents get caught up in the crossfire of their narrow-minded antics.

What will happen as a result of this? Systems will become more closed and more secure as a response to this behaviour. Hackers will insist that things should be more open and free, persistently refusing to take their own actions into account and just giving everyone they lash out against good reason to make things more secure and more closed.

Hackers need to drop the pretence and learn how to resolve their issues like civil, mature human beings.