Going through some old bookmarks I paid a visit to some semi-forgotten websites. One of those websites covers 8-bit home computers and the games found on them. As I was piecing together an image for an earlier article I found myself pondering the origin of the popularity of sandbox or open-ended games.

Certainly there had been many open games presented on BBS in the 80s but their textual nature and often expensive cost of entry always tended to place them on the fringes of gaming.

Like many, Manic Miner was one of my earliest home game experiences but I suppose its successor is the one I’m more interested in at the moment. Jet Set Willy saw you wandering around a multi-screen mansion collecting items placed in each room. Rather than being a single-screen platform game where progression to the next screen was only permitted once the current screen had been cleared Jet Set Willy let the player wander about and explore.

Although primitive by today’s standards the freedom to deviate from the game’s core goals and just tour the game content was quite a big deal at the time.

I recall playing the game – often in turns with my sister – and making a snap decision on whether to see if I could make it to a new area of the mansion or diligently collect everything in one screen before moving on to the next. On reflection, this is possibly the earliest instance of choice-to-explore gameplay I can remember in a mainstream game.

A little later on another title appeared which extended the player’s freedom of choice in a popular mainstream game. Skool Daze saw your character, Eric, attempting to crack the school safe and swipe his end-of-term report before its incriminating contents could be seen by his parents. Unlike Jet Set Willy the game boasted a number of identifiable characters: a headmaster, an assortment of teachers, a school bully and a school boffin. For Eric to achieve his goal he had to fire his catapult at school shields without being caught by teachers. He also had to trip up teachers in order for them to reveal a letter of a code. The school blackboards could be used to try out codes and write messages. These exploits all took course during a regular school day so lessons would take place which Eric could attend or skip.

Once again, the choice to focus on the game’s core objectives or mess about was available to the player but, this time, in a far richer environment and one that a lot of ZX Spectrum players could probably relate to very well.

It’s rather surprising that about twenty years passed until another game portrayed school and school life so vividly (subject to technological constraints) in Rockstar’s Bully.

Rockstar, of course, are inarguably the champions of the popular open-world game with the juggernaut franchise that is Grand Theft Auto. Even so, the seeds of the mighty GTA oak can be seen laid in some older titles.

Skips were (are still?) prawn-cocktail flavour crisps that look like little flowers. For a period of time their makers saw fit to promote their product with a cartoon character called Clumsy Colin – an imbecilic, Hell’s Angel type character perched on a Harley Davidson style motorcycle. Somehow a deal was done that saw budget-priced game publishers Mastertronic produce a computer game featuring Colin. Action Biker was the result. 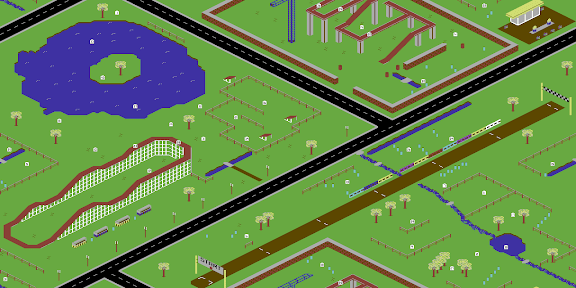 The wrap-around world of Action Biker

The Commodore 64 version of Action Biker was surprisingly good and saw Colin placed in (what seemed at the time) a large world that  wrapped around itself. In this world were the obligatory tokens that had to be collected in order to gain entry to the race at the climax of the game. The game-world, had enough driving challenges and points of interest to easily distract the player from the relatively mundane tast of driving over flashing tokens. Particular points of interest were a roller-coaster, a building site, a race strip and a seemingly unreachable isle in a lake. Sometimes it was just a thrill to pelt down the main road at top speed watching the world whizz by!

The second GTA-like title that springs to mind is Turbo Esprit. Considered by many to be far ahead of it’s time, Turbo Esprit placed the player in the aforementioned car and in the role of a drug-busting hero. A car carrying drugs would be heading to a rendez-vous and the player was required to use the city map and their driving and navigational skills to intercept the criminals and save the day.

The game was presented in 3D, featured a basic traffic system that saw the need to obey traffic lights at junctions and to observe the indicator lights of other vehicles. Whilst there’s not characterisation or plot to speak of any game that allows a player to drive around a city as they wish cannot help but find itself compared against GTA. Some cite Turbo Esprit as an influence on GTA but I think that’s just over-active retrospective assumptions. Having said that, both games were conceived in the UK so.. who knows?

Without wishing to take anything away from the standards and achievements of games today, I think it’s interesting to see these glimpses from past and how they may have played a role in forming the digital playgrounds we enjoy today.