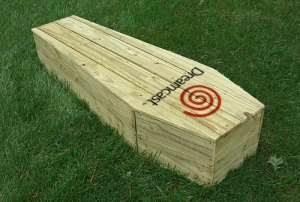 The sheer inanity of melodrama the game culture applies to things never ceases to amaze and irk me. Take, for example, the Sega Dreamcast.

A console that was launched ten years ago to this day and failed to achieve significant market penetration to such a degree that it was discontinued by its manufacturers only a couple of years later (in North America).

Yet, like the Norwegian Blue, many refuse to regard it as an entity that has shuffled off its mortal coil and insist on celebrating its birthday as though it still has a presence in the current marketplace. There is, of course, an inconsistency here because if such practice were to be regarded as remotely normal then every console that was ever made would be given annual recognition regardless of whether its manufacturers buried it or not.

Given the current climate in today’s gaming culture, its fondness for urban myth and melodrama and its selective amnesia, many are fond of ‘blaming’ the death of the console on the PlayStation 2. Suggesting that some sort of console-cide has occurred and, far worse, gone unpunished.

Besides EA’s notable lack of interest in the platform, the more likely culprit to the machine’s death in the marketplace (other than there being a host of more capable, more aggressively marketed products out there) was the crippling piracy issue it suffered from. Whilst piracy afflicts many consoles there is still a barrier to entry – that of needing to modify the console in some way in order to allow unsigned executables to run. The was overcome on the Dreamcast and it was possible to obtain pirate software that would run on unmodified machines. Anyone who knew how to write data to a CD could now get free Dreamcast games. GAME OVER.

With that in mind, it’s interesting to note that software exploits exist on the original Xbox and also on the Nintendo Wii that allow them to be ‘soft modded’ – effectively unlocked to run unlicenced software including pirated games. Microsoft dropped the Xbox like a brick the instant they launched the 360 and, given what happened following the piracy on the Dreamcast, it’s easy to understand some of their motivation. These days, new firmware (the operating system for a console) is distributed online and on game discs. This can often overwrite unlocked systems or render them completely useless – leaving the console owner with a lump of useless silicon.

Hindsight, being the bitch that it is, shows us that just because you seem to be on the up at the start of something doesn’t mean your position is secure by any stretch of the imagination. It’s a lesson many would do well to remember.

I had a Dreamcast, I enjoyed it up to the point where it became fond of  suddenly resetting itself after 30 minutes of gaming (apparently quite a common complaint). Its online was vastly overhyped  (“6 Billion players”) and under-delivered – however much credit Peter Moore attempts to retroactively claim for it. I’ve nothing against the machine or Sega. In fact, I think Sega were very smart in going down the software-publisher route. Instead of competing with Sony, Microsoft and Nintendo they were able to profit from them and they showed chutzpah by putting franchise titles like Jet Set Radio Future, Outrun and Panzer Dragoon on Xbox whilst giving PS2 the underrated Shinobi update along with Rez and Space Channel 5. In the meantime Gamecube got Ikaruga, a regionally crippled Phantasy Star Online and.. er.. Billy Hatcher.

Is this a hate piece? Not at all. It’s a rational piece. One that’s free of emotion or melodrama. If any of this candid perspective is ruffling your feathers then ask yourself how absurd it is to have some sort of emotional connection to a collection of circuits and silicon.