No, I’ve no idea what the word means either.

It’s the self-appointed name of an old school-buddy of mine who has just started to tip his toes into the fascinating and incredibly exciting world of blogging. He’s off to a good start and I think you’ll find his writing and attitude far more easy going than my typically angsty and confrontational style.

Oh, and you earn brownie points for identifying the origin of the phrase that adorns the top of his site. 🙂 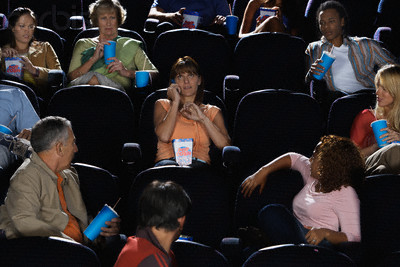 After games, movies are probably my greatest passion. I’m lucky that my town has a multiplex and it offers a sort of ‘all you can eat’ service. I pay a fixed amount each month and all ticket costs are covered. The attraction for the cinema is that I’ll be there more often to buy overpriced popcorn and drinks. The attraction for me is that I can easily budget and see heaps of films. Furthermore, any film I’m a bit unsure of might as well be seen as it’s not costing me anything extra to see it.

A glance at my timeline widget will show you I get through a lot of movies and, as far as the movies are concerned, I enjoy them a great deal. I find the experience of going to a cinema, the screen, trailers and all that stuff to be very enjoyable.

However – is it just me or are audiences the worst thing about cinemas?

When I go to see a movie, I go to see a movie. I don’t go to send texts continuously on my phone. Nor do I continue conversations on my phone. I don’t go with a dozen mates who are too immature to handle a passionate scene without falling into a fit of giggles or who, every 10 minutes rush out of the screen en masse, clambering over seats or calling each other only to return moments later with more giggles or waving their mobile phones around. Constantly kicking chairs, making noise or doing anything they can to provoke a reaction seems to be some people’s goal.

Poor behaviour isn’t restricted to the youngsters either. Adults on their phones or, amazingly, listening to music through one earpiece or simply chatting to one another or at the movies.

The behaviour is rude and inconsiderate and it degrades the experience of every other patron who wants to see the film. Often, it seems, this is the explicit reason for such behaviour in the first place. Yes, I can go out, miss some more of my movie, and call an usher in to observe people being well behaved until they go away again a few minutes later.

Unlike many of the people who set out to ruin a movie-going experience, I work for a living. I can’t just choose to see a film on a quiet Tuesday afternoon. I’m also aware that, from a business perspective, I’m one person. If one person is complaining about a group of five people then, purely on numbers, why should the cinema care? I’m only worth a fifth of the revenue.

In fact, cinemas don’t seem to care at all. After taking your ticket and popcorn money it’s unlikely they’ll get more cash out of you – yet they’re obliged to house you for a couple of hours. There’s little worth, from their point of view, making those two hours better or worse because they’re not going to earn extra income from it. Sometimes I wonder if they’d rather not show the film at all.

So, in spite my 30 or so years being a good cinema patron and in spite of my repeated comments to staff and managers who assure me they’re doing lots to make my experience hassle free (no evidence of this is forthcoming) I’m considering not going to the cinema any more. I can quite easily get the latest releases in good quality and watch them on a 42″ TV at home. I can get my own popcorn and ice-cream (at better prices), I can pause things if I need to answer the phone. Hell, I can even grab trailers if I want.

This is a shame, but on increasing instances I’m leaving a cinema feeling that my time has been wasted as I could not enjoy the film or the film-going experience due to the selfishness and poor behaviour of the audience.

Is there a solution? I don’t know. Cinema trade seems very healthy and each summer sees more blockbusters than the last. Why should they invest more money or effort into keeping patrons happy when they’re queueing up to see movies anyway?

I don’t manage cinemas. I don’t know what their cash-flow is or what their overheads are. What I’d like to see is some positive steps taken to inhibit the functionality of mobile phones in cinema screens. Something that goes a little further than an animated panda telling you not to use your phone. I don’t care if it’s lead lining in the cinema. Or some ultra-high frequency signal that blocks phones from getting to their networks. There’s simply no need to use a phone in a cinema. People seem so concerned that they simply can’t bear to be out of touch with their phone-buddies for two hours that they have to text or natter in a place where communication is expected and intended to be a one-way thing – between screen and viewer. I never have my phone switched on in a cinema. There is simply no reason to have it switched on.

Knowing that I can’t expect people to behave with civility or consideration an alternative/additional pipe-dream comes to mind. At the end of the day, I want to hear the film, not other people. If I could plug headphones into my chair and tune into the movie and drown out the popcorn-munching prats around me then I think we’d all be happy. I get my movie experience, selfish idiots can keep texting their equally selfish mates in the adjacent seat. Many cinemas actually have an audio service for the benefit of the hard of hearing or the blind. This would simply be an extension of that service.

I’m not sure how workable either idea is, and it’s a shame such a ‘solution’ needs to be sought simply because people are too rude and selfish to abide by some simple considerate rules for a couple of hours. Something I’ve enjoyed doing most of my life is being ruined because the people providing the service don’t care for their customers. So if nothing changes, I’ll simply stop using the cinema as my means of viewing movies. All in all, I don’t think I’m asking for very much – either from the cinema or from the audience.