Hello, remember me? It’s been a while. I’ve been rather busy and distracted.

Firstly, if you cast your eyes to the top of the sidebar you’ll see that The Million Metre Swim sponsorship surpassed it’s target. I’d like to thank everyone who put their hand in their pocket. You didn’t have to but you did. Thank you.

I’ve lots to talk about but won’t be doing it today. Instead I just thought I’d share a little bit of fun with you. Below is a Christmas card I received at work and whilst it’s incredibly geeky, it’s also a good giggle. Excuse the awful camera-phone snapshot quality. I’m lazy. 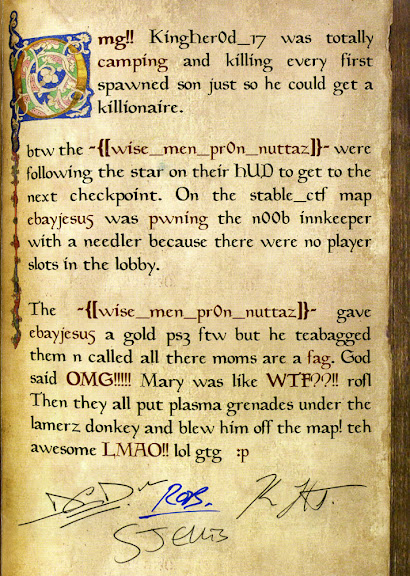 For those of you not wanting to destroy what’s left of your eyesight, a translation:

Omg!! KingHer0d_17 was totally camping and killing every first spawned son just so he could get a killionaire.

btw the ~{{wise_men_pr0n_nuttaz}}~ were following the star on their HUD to get to the next checkpoint. On the stable_ctf map ebayjesus was pwning the n00b inkeeper with a needler because there were no player slots in the lobby.

The ~{{wise_men_pr0n_nuttaz}}~ gave ebayjesus a gold ps3ftw but he teabagged them n called all there moms are a fag. God said OMG!!!!! Mary was like WTF??!! rofl. Then they all put plasma grenades under the lamerz donkey and blew him off the map! teh awesome LMAO!! lol gtg :p

Well, I liked it.