I guess, strictly speaking, I’ve also beaten Crackdown on the 360 as I’ve got through the core game. However, beating a 360 game isn’t like beating most videogames as there’s a sense of dissatisfaction in knowing there’s gamerpoints out there you haven’t earned. Does beating the core game equal beating the game or do you only qualify if you’ve maxed out your points? Either way, I’d gorged on Crackdown and decided to lend it out to a work colleague ahead of the Halol 3 Beta last week. IN YOUR FACE BUNGIE! HA!

I felt like I shouldn’t forget my older consoles – partly because they’re still great machines and partly because I’ve still got dozens of unstarted/unfinished games on them. I’d made a shortlist of titles I’d really wanted to spend some serious time with and Psychonauts found it’s way into my console and free time.

I’ve known of the pedigree of this game for quite some time. I, like many, am a big fan of Grim Fandango so I expected good things from the same creative minds. I knew of the game’s critical acclaim and limited commercial success. I was expecting something special.

Psychonauts, if you’re unfamiliar, is a platform game with a strong accent on item collection. The game mechanics are not that remarkable – your character runs, jumps, climbs, collects, double-jumps and so forth but he’s no Prince of Persia. Initially you’ll be doing your thing around a pretty safe woodland camp environment. The setting for the game is that you are Ras, a youngster at a woodland summer camp for psychicly gifted youngsters. You dream of being a Psychonaut – a sort of psychic ambassador, a righter of wrongs. The game sends you off on your first mission (Basic Braining) to show you some of the ropes. Whilst the run, jump, collect stuff is pretty basic fayre it’s the setting that makes the difference. All the plot-driving levels in Psychonauts take place within the mind of the protagonists. In this training level you’re in the mind of an over-zealous army captain. Bombs, scarred landscapes, planes, guns, and all the other iconic imagery of battle is present. Guidance and orders come in the form of black-and-white newsreel style projections against the landscape rather than some text at the bottom of the screen. Amongst all of this you have collectable items (figments of imagination) that will advance your character’s skills once certain targets are met. Other special collectables include cobwebs of old memories that you can only clean away with an item purchased later in the game. There is also emotional baggage that needs to be paired up with the appropriate luggage tag in order to be collected. Collection completists will have fun here – none of the collectables are essential (the closest to an essential are the figments and they are in abundance) and everything can be tracked on a helpful status page. Collecting all of a certain item will yield a reward in the form of extra information or advancements to your character. In my experience of the game none of these extras are necessary but getting them enhances the stories and characters.

As the game progresses you spend time with other trainers – each with distinctive mentalities – that arm you with extra skills such as shooting a mind-blast against distant foes or learning the incredibly useful skill of levitating which enhances running and jumping abilities and can significantly speed up navigation. Other skills involve telekenisis, shields and invisibility.

To the game’s credit, none of these abilities is wasted and in the later levels there is a strong problem-solving element that comes to play and you will call upon your arsenal of psychic powers to get the better of these challenges. Telekenisis, for example, can be very useful – allowing you to see what others are seeing. At one stage of the game you enter a totally pitch black area but you can hear camera lenses refocusing. If you engage your TK power you see what the cameras see (in all their green-screen, interlaced glory) and you can then navigate the room with relative ease.

Some of the platform challenges are pretty original. Part of this is as a result of the game’s disregard for the law of gravity in some stages. It’s a good example of taking the scenario of being in someone’s mind and taking full creative licence with it. There is one level set in a quaint, white-picket fence american style neighbourhood – except the layout of the level is like something from an Escher painting with a splash of Dali thrown in for good measure. Up equals up in many places but not all. An earlier stage is set on a large cube. Run off the edge and the cube simply rotates around so that its side becomes the floor. Shenanigans ensue.

This sense of cheeky creativity is what elevates this game from satisfyingly competent platform adventure to something in a class of its own.

Firstly, the structure of the game levels and story allows a degree of creative freedom. Each mind that you enter is it’s own story and doesn’t need to relate to a previous level. You spend time in the ‘real’ world, of course but that seem quite pedestrian by comparison. Secondly, the human psyche is a rich environment to draw inspiration from. As mentioned before, there are stages set in the mind of a paranoid schizophrenic but also others set in the mind of a traumatised fallen-from-grace actress, a delude, broken hearted artist, a character plagued by the weight of expectation due to the heritage of his family name and even the mind of a mistreated, malformed fish. This fish level is more fun that it rightly deserves to be as, in the mind of the character, you are a Godzilla-like giant rampaging across his homeland. The scale of the environment changes accordingly and there’s cute narrative jibes at the cliches you might see in a japanese monster movie in addition to anything directly relevent to the game and characters themselves.

It’s fair to say that every mind you enter is a small game in itself and there’s tangible excitement when entering a new mind as you really have no idea what you’re in for other than it should be inventive, contextually correct and very entertaining. Rarely have I seen such fun and cleverness combined to such degree for the pleasure of the end user – typically the most memorable examples tend to be from those legendary Lucasfilm adventures and, of course, that makes perfect sense given the heritage of the team behind Psychonauts. 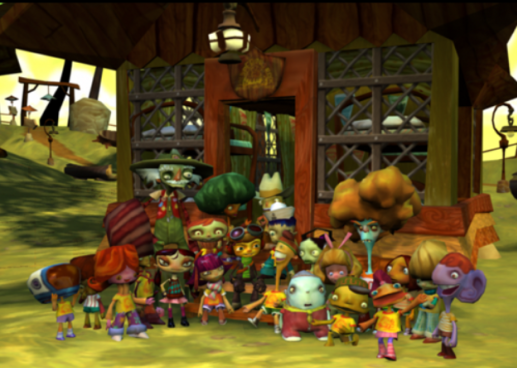 There’s a startling number of distinctive characters in the game. Starting out in the summer camp you’ll encounter over a dozen fellow campers (complete with camp bully and sidekick) who have plenty to say and do. Your trainers are great characters and Milla Vodello, the woman who teaches Levitation class is a wonderfully accented 60’s plaything and easily a match for Austin Powers. You’ll meet a number of plot-pushing characters and, nearer then end of the game, spend some time in a lunatic asylum whose inmate are pretty interesting characters. There’s lots to see and do around these folk and everything works as a cohesive whole. None of the characters are fleshed out in epic war-and-piece detail but there’s more than enough going on to put plenty of flesh on the narrative bones. There’s even a bit of love-interest for our hero that isn’t as cringe-worthy as it might sound.

Visually this game is pretty different. The art style is consistently imaginative and unconventional (for videogames) with a splash of a saturday morning kids show appeal to it. It’s crude in some areas but always effective at communicating precisely what is required without limiting the game’s sense of fun or cleverness. I’d go as far to say the visual style of the game is as distinctive as that of a game like Shadow of the Colossus and works brilliantly. It may not be to everyone’s tastes but I truly feel it would be a shame to let a disagreement about style turn you away from such a rewarding experience. The game is as accomplished aurally as it is visually and narratively. Great music accompanies every area adding precisely the right mood for each. There’s some superb voice acting going on here too – there really is nothing to complain about!

Psychonauts is a game full of moments and observations. All of them positive. It would be very easy to have a long conversation about ‘favourite moments’ throughout the game as it’s endlessly charming and amusing. Hell, even the method you start the game outshines most others! It’s truly a game I’ve enjoyed from start to finish and my only regret is that I didn’t play it sooner.

If you want to learn a lot more about it, check out it’s Wikipedia page. Psychonauts is available for PS2, Xbox (backwardly compatible via 360) and PC. The PC version can be purchased through Valve’s STEAM service. You’ve no excuse!