So, what do you do when you run a community and some bugger keeps on popping up writing stuff you don’t like the sound of? You get one of your lackey’s to warn them of ‘trolling’ and then you ban them. As the laughable Zelda 8.8 incident of a fortnight ago shows, gamers are knee-jerk spoiled brats. It doesn’t really matter what the truth of the matter is – if they’re not hearing what they want to hear then they’re going to throw a tantrum. Apparently, in some corners of the internet bigotry, sexism, racism, making fun of crime, victims of crime, the terminally ill and the recently deceased is fine. Say too many negative comments about Nintendo and, all of a sudden, things get very serious. All that happy-go-lucky ‘It’s just the internet’ attitude evaporates and what’s left behind is a bunch of posturing kids taking things VERY seriously because they don’t like the facts and figures they’re being shown.

Now, in a mature and civilised arena there’d be discussion and an effort to understand the broader view.

That’s not the case in some areas. In spite of being someone who is in the position to offer gamers a wider, truthful and unique view of their ‘passion’ I trolled too many times by not bowing and scraping to Wiidophiles and their immature, nonsensical views and the mighty teenager whose ego runs a community I’ve given far more to than it deserves (considering the invasion of my privacy and my other sites they conducted) have seen fit that I must be done away with.

You see, fact has no place on gaming communities. Neither does criticism of Nintendo.

For all that I can offer (and have offered) I have committed far too many sins of outwardly not tolerating fools and refusing to suck down hype like the besotted chidren biting at my ankles.

What do stroppy teenagers do when when their more informed, more experienced, more impartial elders highlight the inadequacies of their behaviour?

They slam the door!

The gaming community never fails to show it’s intolerance and willful ignorance. It happened today, it’ll happen tomorrow. And those on the other side of the door will congratulate themselves on how clever they are for knowing how to slam it in the first place.

Here’s a little fact that I hope pisses off a great many of you: game developers rarely mix online with gamers because gamers can’t cope with being told some cold realities or having to deal with facts that burst their little bubble about what happens in the REAL world of videogames. Developers frequently mix with one another on communities – but they make damn sure that gamers don’t know where these communities are. They’ll just crash the party, shoot their mouths off and spoil it for everyone. Gamers show that, despite their apparent ‘love’ of games and ‘interest’ in gaming they’d rather kick those in the know out than tolerate a view that differs from their own.

Game developers, on the whole, really don’t mind being excluded from the ranks of mediocrity.

So, as the mad rush rush to be the first with THAT Zelda review dies down so does the hysteria. Let’s face it, Nintendo zealots are a predictable bunch. They already know that the unproven, unreleased Wii is The Second Coming (because Nintendo says so). They already know that the unreleased, unplayed Zelda game is The Greatest Game Ever because it’s the new Zelda game!

You know what? They’re prejudiced children.

This is highlighted by the fact that Gamespot (A site I freely admit to having a fondness to and for paying a yearly subscription to) has finally put out their Zelda review. Looks like they weren’t rushing to get those important web-hits by being the first to praise the game.

The reception to this ‘terrible’ review has been savage. The prejudiced fans have practically put a fatwah on the reviewer’s head and started to throw tantrums using words like “boycott” and calling the reviewer “fat” and a “hater”.

People don’t like to hear news that doesn’t fit in with their ideas. Nintendo zealots are the masters of this behaviour – instantly branding any critic of their dream an idiot/hater or someone who doesn’t know what he’s talking about. Even if he’s a professional reviewer, an award-winning game developer or someone who’s been involved in games development longer than Nintendo have been producing consoles.

I knew this would happen.

I have said for years (and in previous koffdrop.com posts) that Zelda is nice but it’s not amazing. The formula is getting old and, more significantly, games of a similar ilk are surpassing Zelda’s block-pushing antics by a considerable margin. Clover’s PS2 swansong Okami immediately springs to mind.

Nintendo fans have enjoyed telling people it’s all about the gameplay – yet now there’s a new Zelda game that equates to little other than the same game as before but with shinier graphics and, crucially, with gameplay that’s been described as ‘aged’ instead of ‘classic’ the knives are drawn.

Some games news sites have this ‘terrible news’ on their front page as a news item. I think that says a lot about where the collective culture’s mindset is at. The fact that a game scoring lower than people’s pre-judged expectations is becoming news? It seems common that when people have expectations of something, when those expectations are not met the immature thing is to blame anything other then those expectations.

I don’t have the need for webhits. That’s because I don’t have adverts on my site and a need to bring people here by posting news they want to hear. That’s why I don’t need to spin any news. This culture shows itself up for the immature sham that it is and incidents like the reception to this Zelda review prove my point perfectly. I will probably buy Twighlight Princess as I bought WindWaker. I will play it as a game first and as a Nintendo Zelda game … never. What’s the point? That’s just being led by the hand by marketing men.

I prefer to think for myself. It would seem like that is a revolution in this culture.

I chanced upon a collection of MP3’s that went by the heading It Takes A Nation of Tossers recently. Naturally, my curiosity got the better of me and I took them to one side and had a listen.

What greeted my ears was what I can only describe as a cross between Eminem and Geof Boycott (well known cricketer of yore and outspoken yorkshireman). The artist is called Pitman – a reference to working down a mine pit – and the content was pretty accomplished and highly amusing.

It’s possible that I’m fond of it due to the fact I’m a southerner that’s now living ‘oop north’ – where terms like cob, mardy and calling people duck still seem a little alien to me.

Anyway, enjoy a new feature of Koffdrop.com – streaming audio – and have a listen to one of the tracks. If you want more just head to my files section and help yourself.

If you grab any files or stream the audio please write a comment and let me know if you found it useful and if the streaming speed was decent.

I’m not an Ice Hockey fan – in fact, there’s few sports that spark my interest. However, my employer had kindly organised a trip to a big game and myself and the good lady wife enjoyed some exciting sportsmanship, the odd scrap and some free booze.

I have to admire the attitude of my employers. In my first week I was on a trip to Alton Towers, they’ve organised bowling trips, tonight’s hockey game and then there’s the Christamas do (whatever that my turn out to be) looming – not to mention last week’s fun Gong of Terror and other Game City events. All have been great fun and just make me happier knowing that not only am I doing a job I enjoy with a firm who has a reputation for quality – but they’re also good at looking after their staff!What a difference from 8 months ago!In other news, my US copy of Final Fantasy XII turned up ONE DAY after the US street date. Got to admire that! EB must have shipped it one day early and UPS did the rest of the work. OK, I got stung for £20 of import tax but that’s the first time it’s ever happened to me and, strictly speaking, I can’t complain. 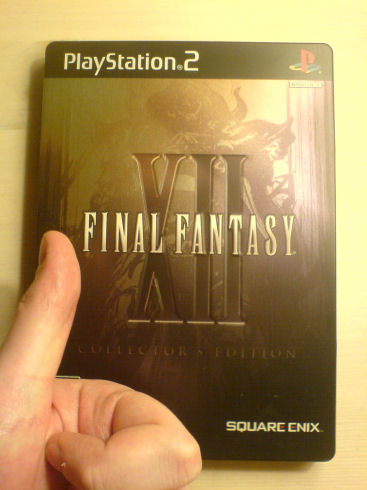 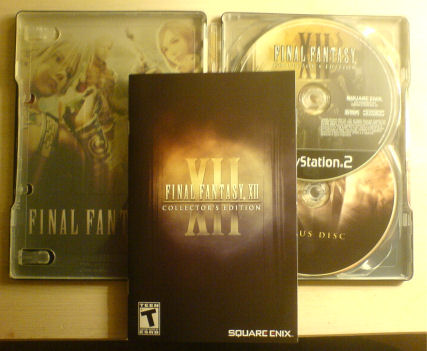 I’m looking forward to getting stuck into it. It’s a shame that I’ve not managed to find the time to stick the damn disc in my PS2 yet!