Back in mid-March I wrote a post here. The point of the post was more for me to vent my frustration than to educate or inform any readers. I’d been having a pretty hard time of it at work due to ridiculous workloads being handed to me – the direct result of staff leaving my team and not being replaced whilst picking up all the work for my system that they covered. This, in a nutshell, saw me doing the workload of four people with little support and no reasonable solution being made by my employer. I was planning on making an official grievance and was looking to do things The Right Way. I understood that seeing my GP to comment on how this was affecting my health and mental state would be worth doing and support my grievance claim. Unsurprisingly, my GP signed me off work. I certainly wasn’t planning on communicating with my employer but felt a good “work sucks” post (that deliberately didn’t mention names) at my own website would be good therapy for me. That’s what the ‘I’m not dead’ post was about.

So, if you’ve not read the post in question then why don’t you do so now? It’s ok. I’ll wait.

I expected a few comments from regular readers but was pleasantly suprised to see a new commentator at my site – Monkfish. It turns out that Monkfish didn’t think much of my situation and had plenty to say on the matter. Obviously, I had a differing point of view and decided to respond to his comments. Monkfish in turn felt it necessary to respond again and a little exchange began. You can read all of this in the comments below the original post.

By the end of the exchange it’s fairly accurate to say that I felt Monkfish was being deliberately antagonistic and what I’d hoped would be a mildly stress-relieving exercise had annoyed the tits off me.

This played on my mind for a few hours and one or two people said a few things to me about it and suggested that I try something..

The software that powers koffdrop.com is called WordPress. It’s great. One of the many useful things it does behind the scenes is store information about commentators. A commentator must have a name and an email to be allowed to make a comment. It’s unlikely that any commentator will use genuine details and, for the most part, that’s fine by me. If WordPress detects a new commentator it will not publish that person’s comments until the Administrator (that would be me) approves them. After a commentator has had a few approvals WordPress regards them as a trusted source and automatically approves that person’s comments without asking me. This is a good way of tackling comment-spam which litters some blogs.

Another piece of information collected by WordPress is the commentator’s IP address. This is a number specific to the computer they were connected to the internet by. It’s a rather useful nugget of information to have if you need to moderate something troublesome. An IP number will look like WW.XX.YY.ZZ . Some of that number will be about one specific machine on a network. Another part of that number will be about the network itself. Just like a postal address has a line about the street and then the city and then the county, the scale of geography that each element of the IP address covers grows. With this, information I could block a certain computer or all computers on a specific network or an entire network completely. IP numbers are useful in moderating communities; anyone that has ever seen the workings of an internet forum will be familiar with this.

So, I fire up a DOS prompt and request a traceroute on Monkfish’s IP. Here’s what I saw: 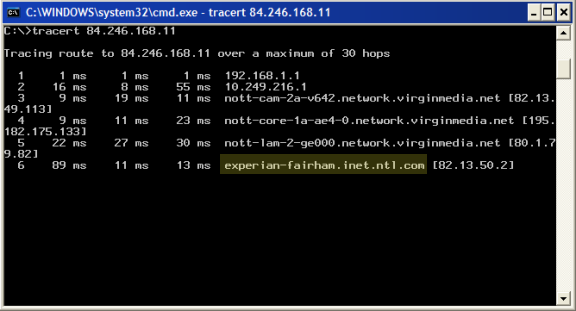 I suppose now would be the appropriate time to tell you that my employer at the time of writing is Experian. Experian is a company all about data and they take their data security very seriously. Whilst my little PC’s traceroute request might knock on the door of Experian’s network, it sure as hell isn’t going to let me in unless I’m meant to have access. So that’s where the traceroute’s usefulness will end.

However, it doesn’t take a computer geek to work out what this means. Monkfish, despite the claims of posting from home on their day off, was clearly using a computer inside of Experian’s network. It’s not too much of a logical jump to assume that Monkfish is an employee of Experian. Which tends to put quite a different spin on the reasoning behind Monkfish’s comments.

WordPress notifies me by email of any new comments added to any of the posts here at koffdrop.com. So, with that in mind, the end result is that my employer is responsible for sending me antagonistic emails whilst I’m signed off work with stress. All in all not quite the therapy I had in mind when I decided to have a little rant.

Apart from the sheer amazement at my employer’s mentality to allow such behaviour to happen – (behaviour that certainly constitutes bullying and harassment as defined in Experian’s own grievance procedure documentation) I was more than a little bit annoyed.

I’m not thrilled that I’ve seen respected colleagues move to tears due to pressure put on them by other staff. I’m not happy about having to compromise my own level of service to the clients I speak to simply because my workload had increased to such a point that I simply couldn’t double or triple check the things I needed to check. I’m angry that Experian’s apathy of the impending crisis was magnified by their total indifference to supporting their staff and the sheer mis-management of the issue and accusations directed at the staff that were trying to get on top of the situation.

I’m not thrilled that so much was dropped into my lap that it affected my health and happiness outside of this underpaid role and that my employer clearly appears to resent the fact that I wasn’t prepared to sit around getting taken advantage of any longer. I am, of course, not happy that my employer allows their staff to persecute and antagonise the staff that they made sick whilst they have been signed off sick by making the comments that Monkfish felt it necessary to make.

I think that if you re-read Monkfish’s comments with what you now know you’ll see just what sort of agenda was being acted upon.

Fortunately for me, my employer and Monkfish were not quite as smart as they thought they were and, thanks to WordPress, they left a little digital trail of breadcrumbs that this post elaborates upon. Feel free to try out the traceroute command yourself based on the information I’ve provided on the screengrabs above – you can see precisely what you have to type in if you look at the top of the second screenshot. Knock yourself out.

I sincerely hope that both my employer and Monkfish read this post on koffdrop.com. I imagine they’ll feel pretty angry at me for daring to make such a post but will then feel embarassed enough to realise that if they hadn’t behaved in such an unsavoury manner I wouldn’t be sitting here typing about their failed little game.

As a final sweet note I’d like to point out that I prepared this post on my home PC. WordPress allows the user to draft articles in advance and then publish those articles with the push of a single button much like drafting an email to be sent at a later date. The very last thing I’ve done on my work PC is log into the WordPress admin panel at koffdrop.com and hit the PUBLISH button on this post. It seems like a very fitting final action to perform before I switch off this PC for the very last time and head down to the pub and say goodbye to Experian forever.