A while ago I was recommended a game from some place. I don’t recall where. The recommendation was so enthusiastic that I felt it’d be rude not to investigate. The game is known as DROD – Deadly Rooms of Death and it looks like this: 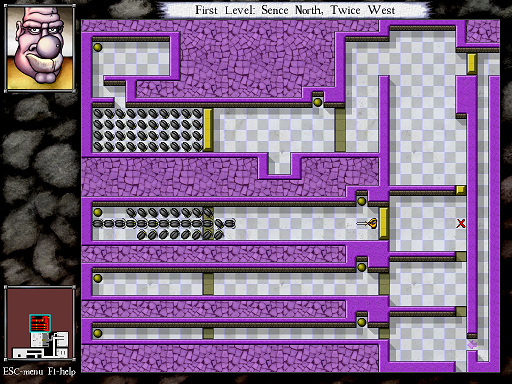 DROD – Not too tricky.. yet

Clearly, this game isn’t about the graphics. Whilst this may disappoint some of you, others can take joy in knowing that it is possible to play this game on a low-spec PC. For those of you wishing for better graphics then you’ll be pleased to learn that the image above is taken from the FREE version of the game. A newer engine has since been produced which features updated graphics – however, the same top-down view is used.

So what’s so good about this game then?

Well, apart from being a jewel in the crown of the ‘gameplay over graphics’ argument (one which often gets forgotten as a new generation of hardware launches) the game is FREE, contains humour that’s just the safe side of black and, as already mentioned, doesn’t require you to remortgage your house to play it on a PC.

The game is a series of rooms spread across a series of floors. You play Beethro – a sort of medieval Rentokil employee. You must eliminate all the dangers in each room of the floor to gain entry to the next. In many respects the game plays like those Zelda dungeon sequences. A series of very simple entitles combine to make increasingly challenging rooms.

An example of these entities and their simple nature are switches (which toggle barriers), roaches (enemies that instinctively approach you directly)and eyes (stationary until you enter their line of site, then they move towards you). Each entity has behaviour that, on it’s own, is very simple to understand. However, once the game starts to combine them together along with fiendish wall and floor design it becomes apparent that ‘simple’ does not mean ‘easy’.

If your head is still in Zelda dungeons then allow me to point out some crucial differences between Zelda and DROD. For starters, DROD isn’t an action based game. Quick reactions are not necessary because enemies don’t move until you do. Movement is conducted by using the number pad keys including 7,9,1 and 3 for diagonal movement. Beethro moves from square to square with each press of the key. After Beethro moves, the enemies move. If you don’t move then nothing happens. Whilst this may sound rather placid and unexciting it makes the game incredibly fair and approachable. There are no random scenarios, there are no times when the game is giving you impossible odds. Everything can be achieved by some thoughtful movement and a little planning. In fact, the best way of playing the game is to look at each room and think before moving.

Like Link, Beethro has a sword. Unlike Link that’s all he’ll ever have in his arsenal. This is no RPG and there are no power ups. Death is instant and always your fault. Beethro’s sword skills are basic – it points forwards. Pressing the Q and W keys rotate Beethro and sword and count as a move – just like stepping across tiles does.

The golden rule is to keep your sword between Beethro and his enemies and you can’t lose. Of course, sticking to that rule isn’t as easy as it might seem 🙂

And that’s all you need to know to play the game. Needless to say, the first few levels will get you warmed up and get you totally familiar with the mechanics of gameplay. After level 3 things start to get more serious and you’ll probably find that keeping Beethro alive probably involves fancier footwork than you might have assumed the game would allow.

The free version of the game has 25 levels in it and, by level 8, you’re going to be facing challenges and downright cruel design that will make Zelda look like a walk in the park. Under no circumstances should you underestimate this game based on it’s simple controls, turn-based nature or basic looking graphics.

As it is, DROD represents one of the most finely crafted and cleverly designed games I have ever played and I’m only sorry to say that I joined the party so late.

Head to the downloads section and look for the file that’s shown as “0 kb” – that’s the full King Dugans Dungeon (KDD) set of dungeons for free. The actual download size is around 13mb.

There are no shortage of fan-made levels and graphics on the forums of the site. Also, a whole updated version of the game which includes lots of cosmetic updates and brand new dungeons (referred to as Keeps) collectively called “Journey to the Rooted Hold” available for purchase. If you storm through the 300+ rooms in the free version of the original game then I recommend you purchase the newer version.

It’s also worth pointing out that you never need to be stuck!

The DROD forum is a marvelous place and has a truly superb search function that allows you to select which set of dungeon/keep levels you want help on, choose a floor, click on a graphical represenation of the room and then see a series of support posts related to that specific room. Absolutely fantastic.

I understand the game makers are making a community based interface that you can subscribe to that allows you to see high scores, best runs and other information about your particular room as you play it.

I very rarely openly declare my undying love for a single game. I also find myself very rarely so impressed with a game demo that I want to invest in the full thing. DROD defies my nature in both these aspects and I can’t recommend it highly enough but will attempt to do so until the day I die. It is supremely well designed and extraordinarily easy to pick up. It is, without question, the best game you’ve never heard of!