It’s out in Japan, it launches in the US and I couldn’t care less if you paid me. The masters of re-release have done it again and everyone’s going gaga for it.

Pay again for exactly the same technology! Play identical games on the same hardware that you already own! Feel like you were part of the eighties by getting the Famicom coloured one. Even though you don’t know what a Famicom is or what the word means!

At a retail of $99 the general consensus from those who know (such as the enlightened but harsh folks at QT3) is that it’s retailing for around $40 too much and is too small to use comfortably in adult hands. 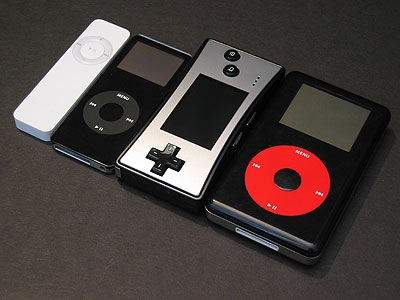 That’s not my U2 iPod. I have a Creative Zen. They’re much better.

To be honest, if I was as shamelessly manipulative, money grabbing and keen to fleece my unnervingly loyal consumer base as Nintendo are then I’d do this too. I’m really not sure that we need a third generation of Gameboy Advance. Particularly one that offers nothing new and manages to make itself incompatible with a range of existing peripherals that work fine with the GBA and GBA SP due to it’s diminutive size.

There’s no need for this really. The issues of the original GBA (backlit and rather exposed screen and non-rechargeable battery) were solved in the GBA SP. The only advantage that the Micro offers is that, lo and behold, Nintendo have seen fit to allow you to plug your headphones directly into the unit without the need to buy an additional, Nintendo endorsed, peripheral. Cheeky bastards.

So, if you’re a kid with small hands who happens to know why red and gold represent Famicom colours and have a spare $99 this is the perfect gift for you. Even if you have a GBA and a GBA SP.

Knock yourselves out you mugs!