Allow me to direct you to Nottingham’s GameCity event. As the name suggests, there are various gaming seminars, tournaments, lectures and gatherings being held RIGHT NOW across the city center.

Being based in Nottingham, Free Radical are involved in a few events. I’ll be attending the Free Radical Gong of Terror that kicks off tonight. The event is a sort of talent show where hopefuls pitch game ideas to a panel of judges. There will a gong. Terror is optional. The prize? Well, it’s something money simply can’t buy!

You can find out more about precisely what events Free Radical are involved in by checking their web page here.

If you’re near Nottingham (or even if you’re not!) you should pay the GameCity event a visit. Maybe I’ll see you there!

I take my gaming fairly seriously – and with good reason.

My home currently has two televisions, one in the front room which is connected to the Sky box (soon to be replaced with the Topfield PVR) and one in the back room which is totally dedicated to gaming. Both are 28″ CRT models using SCART for their input.

As my desire for next-gen consoles begins to grow serious I’ve realised that I’m going to sulk if I don’t play games in HD. I freely admit that it’s not just about the image quality. I know that if I were to be playing a X360 or PS3 on a regular TV I’d be sitting around thinking “I know this would look better if I had an HD TV” – subsequently, I’d be spoiling my own enjoyment by focusing on what I don’t have rather than what I do.

Now, of course, that’s all in my head – but that’s the way I am. I’m not sure if that makes me some sort of HD sucker or someone who’s fallen for PR. I just know that I want to get the best out of whatever box I connect to a TV.

So I’ve decided to hold off buying any new consoles (including the Wii) until I upgrade my TV. Speaking to my best friend at length and walking around a few retailers I’ve decided to plump for a 37″ LCD HD model. Specifically the Toshiba 37LW66. It fits to a budget of around £800 (if you shop around online) and also 37″ is about the biggest screen I think I can put into that room in any practical form. I’m still quite happy with 28″ of CRT so anything larger than that will be fine. In fact, having viewed the TV in-store it looked surprisingly big to me and my wife. And, as we all know, things always look bigger at home than they do in the store.

The model seems to have been well established and garnered positive reviews all round. My space concerns are more to do with width than anything else so the design of the TV is appealing. Speakers placed somewhere other than the sides of the screen mean the unit isn’t any wider than it needs to be.

Being the tight-fisted git that I am, I’m refusing to buy the beastie until I’ve got the cash in place for it. I really hate buying stuff on credit and try to be a cash-only guy. With the holiday season fast approaching and all the strain that puts on one’s finances I think it’ll be 2007 before I see it in my home. Not long into 2007 though!

The next step is to grab component cables and a component switcher for my consoles to that I can take immediate advantage of the screen quality with my existing machines.

So, if anyone wants to know what I want for Christmas, there’s your answer!

Those few of us that bought the PAL PlayStation game Castlevania – Symphony of the Night will recall with some smugness that the package contained an audio CD and artbook. A pretty good deal and one that fetches a fair price on ebay.

Well, look lively, because the second Nintendo DS Castlevania game (Portrait of Ruin) has a pretty spiffy pre-order incentive in the US: 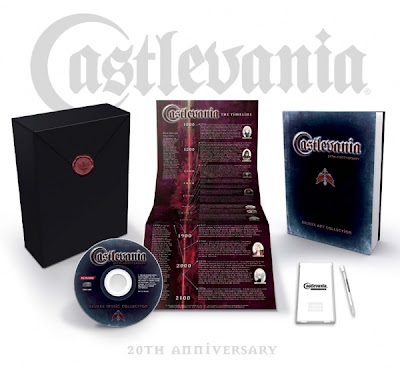 I’m only aware of it being on offer at EBGames / Gamestop sites in the US. The EB product page is here. The price is $39.99 plus $15.99 international shipping which when you feed it into a currency converter comes out to a reasonable £29.73. I wouldn’t be surprised to see the UK retail price of the standard game be £29.99 when it eventually comes out over here – so it’s a no brainer for people like me! US street date is 5th December.

The game itself looks extremely good – and sure to please fans of the Castlevania series.

I’ve ordered from EB online only once before and that’s for the Final Fantasy XII Special Edition (poncy box). For some reason it took a number of times for the site to accept my details but I got there in the end. Seeing as neither of the games I’ve ordered are out yet I can’t comment on the delivery service or speed. If any readers of this site have any experience of them be sure to let me know what you think!

It’s been an awfully long time since my last post, I know. I’ve been rather pre-occupied with work and playing games.

That season is upon us, once again, where far too many good games appear that could either be reasonably afforded or have the time to play. And I’m writing this as a guy who doesn’t have any next-gen hardware.

I’ve had a bit of a binge on Ouendan on the DS to the point where I really have to put it down to give my wrists a rest and to lower the risk of creating horrific scratches on the touchscreen. I’ve beaten the third diffiulty setting and now have the fourth to tackle. I tried a couple of songs, got my ass handed to me, swore a bit and decided to play some Fire Emblem instead.

I’m keeping my eye out for Contact as it looks interesting. I found the developer’s last game, Killer 7, to be totally overrated pap that was so focussed on being special, obscure and different they forgot to bother with adding anything resembling decent gameplay. Gaming elitists love to champion the game as something ‘very special’ and tell you that, if you don’t like it you don’t understand it. Nah, I don’t like it because it was no fun. Rez is misunderstood – but it’s fun from the getgo. So is Panzer Dragoon. And let’s not get started on Beyond Good and Evil.

So, yeah, Contact. Looks intriguing, hope it’s not a bore-fest.

Coming not a million miles away from the people that brought you Killer 7 is the game I’ve probably spent most of my recent time with: Okami. It’s the one with the wolf from those Clover chaps that just go shut down (I’m still not clear if they jumped or if they were pushed but it’s a moot point). Cracking game, very satisfying, very pretty and has a novel mechanic in the form of the Celestial Paintbrush. This has echoes of the special powers in Viewtiful Joe that can aid the character in battle and in environmental puzzles. I’m about 60 hours into the game (a good 25+ of those are from leaving the game on PAUSE) and getting to that ‘looking forward to it being over’ stage. It’s great and all, I’ve probably just binged on it too much.

Final Fantasy 12 looms (US release on the 31st) and, from what I’ve played of it, I’m very impressed. Technical excellence and many interesting gameplay changes that make the game feel more immersive.

Before that is Rockstar’s Bully which, if you’re a thoughtless and lazy reviewer is “GTA in a school” but, if comparisons must be made, owes far more to the ZX Spectrum games Skool Daze and Back To Skool. You can argue that these 80’s era 48k games featured a style of sandbox gameplay that is now synonymous with GTA. Either way, Bully is appearing in stores around the world and, of course, being followed by a rabid Jack Thompson. Some UK stores are already claiming they won’t stock the game and that’s up to them. Rockstar get the publicity and, by the looks of things, the game has second guessed all of the moral majority and shown who the REAL bullies are. Politics aside, the game’s meant to be pretty good!

My other been-waiting-all-year-for-it game, Level 5’s Rogue Galaxy, has now been delayed until January 2007 but promises extra polish (to what looked like a very polished product anyway) in the US version. I’ll be importing that baby the moment I find a decent price.

I’ve decided that, before I get any new console hardware, I’ll get me an HD TV. If I bought a 360 and started playing it today on my current screen I just know I’ll be spending most of my time wondering how much nice it might look in HD. So sod it. Stick with my existing range of consoles and get the new screen first. My A/V minded friend assures me that a 37″ LCD TFT is what I’ll be after at some time 2007. Sounds good to me. Hell, it’s not like I’m going to run out of current games any time soon!

Movie wise, I’ve got my sights set on the new Bond movie Casino Royale. I’ve totally up for this and, since watching Layer Cake, realised Daniel Craig is well worth seeing movies for. I was delighted to see him secure the Bond role and am confident he’ll do it justice. The trailers I’ve seen of the film so far are very promising. Roll on November 17th! After that I guess The Prestige is next highest on my list. Hugh Jackman I can take or leave but Christian Bale is a seal of quality. Directed by Chris Nolan (Memento, Batman Begins) and set in the world of magic and conjuring this looks THE BIZ. Some time back I bought a novel based soley on it’s cover (yes, judging a book by it’s cover!) and it was brilliant. The book was called Carter Beats The Devil and was the story of a turn-of-the-century vaudville magician getting caught up in rather large government plot. I guess Paul Daniels meets John Grisham is a blunt way of describing it. I loved the book (and so do others that I’ve recommended it to) and it’s made me very receptive to magician/thriller plots which is a term that The Prestige seems to be suited to.